The Boston Celtics implemented Tweets on the Jumbotron to engage fans in-venue during the game. Using social channels to raise audience participation levels to an all-time high, the Celtics built an eco-system that connected fans and players in the Garden through targeted, relevant, and interactive social content.

SportsNation Halo 4 Bowl featuring a strategic Twitter activation that gave fans the chance to pick sides in a gaming competition by using #SNHalo4Gronk or #SNHalo4Cruz to join a team. The hour of Social TV featured integrated Twitter promotion, high-end edited pieces with star NFL players competing in Halo 4, and an overhauled set. New England Patriots star Rob Gronkowski and New York Giants star Victor Cruz played one another in the Halo 4 game, lobbying the audience to join their respective teams on Twitter to win Halo gear.Strategic use of hashtags to drive awareness during the live show. #SNHalo4Gronk or #SNHalo4Cruz trended on Twitter without interruption from 5:35-6:14. • Most valuable prize package we’ve ever offered in a social giveaway on Facebook and Twitter, headlined by Halo 4 games and Xbox consoles, leading to huge engagement. • ESPN talent & athlete participation in a Twitter integration and content promotion for SportsNation was unparalleled, featuring Gronkowski, Cruz, Trey Wingo, Matthew Berry , Cari Champion, Robert Flores and others, totaling 2.MM+ followers in social. 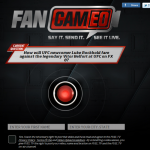 FOX Sports Fan Cameo is a user friendly and simple solution to encourage interaction for both casual and hard core fans that allows FUEL TV fans to engage with on air talent and participate in on-air content. 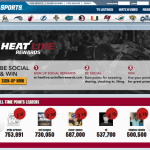 Fox Sports Florida Live Rewards incorporates broadcast, websites, social media, online purchases and in-venue activation. This allowed Fox to make a connection between the local team and Fox Sports and reward users wherever and however they wanted to interact. In addition the program included sponsorships. The program not only allowed fans the opportunity to earn points on Live Rewards programs by checking into local Subways or Checkers but also for signing up for newsletters, following the sponsored brand on Twitter and more. To close the final loop fans also could earn points and special fan experiences by interacting with the on-air Fox Sports Florida personalities. In less than six months the program helped Fox Sports Florida improve it’s social media accounts over 60%, generated over 6 billion social impressions and over 3,000 hours of time spent on Live Rewards sites. 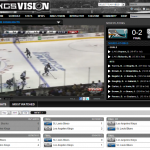 Among other mementos from the 2012 Stanley Cup Championship for the Los Angeles Kings is “Stanley Cup Moments,” a 20-episode compilation that follows the 2011-12 playoff run, from Jarret Stoll’s overtime goal against Vancouver, to the celebration after game 6 of the Stanley Cup Final. The series is distributed on many platforms including the NHL Network, Fox Sports West, STAPLES Center in-arena, LAKings.com and have gone viral on social media platforms such as Facebook, Twitter, and Reddit. Combined, all 20 of the Stanley Cup Moments episodes have over 170,000 views on YouTube. 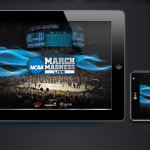 Turner’s NCAA March Madness Live gave fans unprecedented access to the NCAA Division I Men’s Basketball Tournament, offering live streams of every game as well as the social conversation around the games. Every game featured a feed of social conversation from Twitter and Facebook, curated for that specific game, as well as an overall Tournament Tweets feed. Fans could snap and share video highlights from each game as well as post their own thoughts on the game. 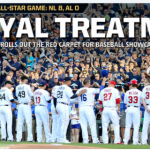 Working with Major League Baseball, FOX Sports executed multiple social integrations into one of the most advertisement-driven games of the year – the MLB All Star Game. In the inaugural year of the Social Concierge and MVP Social voting, it was a goal to incorporate meaningful social components to enhance the viewing experience. To do so, FOX Sports gave viewers a glimpse into the social concierge as players, like Matt Kemp, David Price and Derek Jeter, and others who exited the game shared their sentiments on social outlets and encouraged fans from all over the world to vote via Twitter for the MVP of the All Star Game. 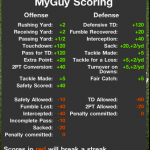 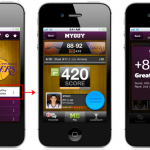 Viggle’s MyGuy allows fans to play along with televised football and basketball games by choosing athletes and scoring based on how they perform during the game. Points can be redeemed for real-world rewards (such as gift cards to Starbucks and Best Buy). With an average of over 8,000 users playing along each game and engaging with the application for an average of 75 minutes per session. 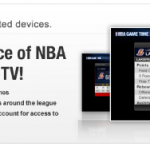 NBA Game Time is available on mobile phones, tablets, and connected devices The app provides highlights, access real time scores, stats, schedules for every game and much more at home or on the go. Two key components introduced for the 2012-13 season are customizable alerts and custom Twitter streams for each game. The upgrade, Game Time Plus, offers all the features and functionality of Game Time, but with video alerts and the audio broadcast from both the home and away teams. Additionally, Game Time is also the gateway for League Pass Mobile, which allows fans to stream live NBA games. 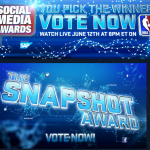 The first ever NBA Social Media Awards was created by NBA TV/NBA Digital, utilizing on-air, digital, and social media promotion NBA Digital to honor the players, plays, and teams that had the biggest impact on the social media landscape in 2011-2012. The following assets were utilized throughout the execution: linear/online banner creative, email database, NBA TV Facebook/Twitter platforms. There was a social convergence on-air and online orchestrated by NBA TV that seamlessly flowed between multiple locations/partners (i.e. Facebook, Twitter, and others) that allowed fans to follow each award, each act, and each interview without missing a beat. 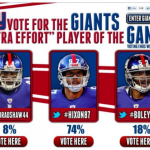 The New York Giants were first professional sports team to integrate LIVE Tweets into their broadcasts using the hashtag #NYGiants. With the Mass Relevance platform, the Giants were able to get Tweets on screen in two seconds. Additionally, tweets were displayed in the stadium, on video boards, pylons, and ribbon boards. They also created a weekly Twitter poll that went up on Giants.com after each game. The poll asked fans to vote on the “Extra Effort” player of the game by Tweeting with a hashtag designated for a specific player. Driving sales and ecommerce, the week’s winning player had their jersey discounted on Giants.com. During the preseason, the Giants Twitter followers grew by 122.87% and they moved from being the 23rd most social team in the NFL to the 3rd most social team in the NFL. 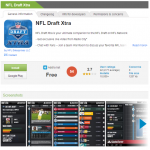 Visiware supported the “NFL 2013 Draft” by developedd a second-screen solution used in the NFL’s existing app (NFL ’13) to a companion app experience called “DRAFT XTRA”. The NFL Draft was seen by over 25M viewers, during 15 hours of programming, and Draft Xtra was promoted on tv and available to everyone. 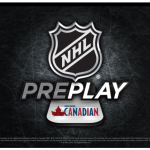 A partnership between the NHL and PrePlay, starting April 2012, the NHL, PrePlay and MillerCoors’ Molson Canadian tp drive and sustain tune-in of NHL hockey across networks and territories through social gaming. PrePlay developed a mobile-first social game called Molson Canadian NHL PrePlay that prompts fans to make and share predictions for what’s going to happen next during live games. Available for free on Android and iOS, NHL PrePlay is built on the PrePlay platform that streams live play-by-play data from sports arenas to users in less than 90 milliseconds. To date, fans have registered more than 2.7 Million predictions and posted over 700,000 chat and social media messages through NHL PrePlay. Fans play the app for 37 minutes at a stretch on average, and watch the broadcast 12 minutes longer than they otherwise would. 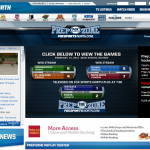 FOX Sports North and foxsportsnorth.com broadcast “Prep Zone,” a weekly event containing multiple games live streamed from different locations all being able to be viewed at a single time at foxsportsnorth.com. The sports on Prep Zone are Football in the fall, and Hockey and Basketball in the winter. Each game contains multiple cameras, announcers, graphics and replays to simulate a normal broadcast experience. Viewers can see the games on their PCs, Smart-phones and tablets. During each game via SnappyTV, an administrator clips off important plays and those are then readily available to watch below the live-stream window. Those clips are also able to be sent out via Twitter and Facebook so viewers have instant access to them by social media. 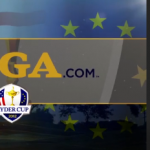 Shazam partnered with NBC Olympics to power a social and interactive second-screen experience across all NBCUniversal properties, including NBC, NBC Sports Network, MSNBC, Bravo and CNBC, during all 17 days of the Games. Shazam recorded more than a million tags from the Closing Ceremonies, alone. People spent over 7 million minutes engaging in Shazam’s Olympic features. 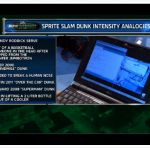 Turner worked for six months with the MIT Media lab to create a technology and a stat for the Sprite Slam Dunk contest, measuring the force of a slam dunk. They used conductive thread that transmitted an electrical signal through the nylon of a conventional NBA basketball net. By connecting the thread to a computer chip mounted behind the backboard, they were able to render the force in a graphical output. 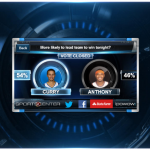 After 6 months of Facebook Live Votes on the ESPN TV shows ‘First Take’ and ‘Friday Night Fights’, ESPN engaged iPowow to provide Second Screen live voting technology for SportsCenter in September 2012. In the last 6 months the iPowow SportsCenter Live Vote has helped generate levels of viewer engagement on the Second Screen platform of a record-breaking 15 percent of the TV audience with State Farm as national sponsor. 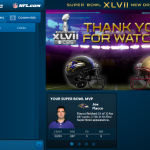 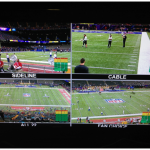 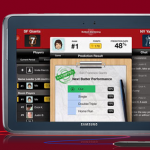 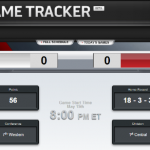