Political discourse takes on the face of social networking | McClatchy

Not long ago, TV was the overwhelming voice in the political conversation. It consisted of campaigns talking at us, often in ways that drove us batty.

Today, the television is but one of the screens battling for voters’ attention. Read more

Moderator Role Under Scrutiny — Before the Debate | The Page by Mark Halperin | TIME.com

In a rare example of political unity, both the Romney and Obama campaigns have expressed concern to the Commission on Presidential Debates about how the moderator of the Tuesday town hall has publicly described her role, TIME has learned. Read more 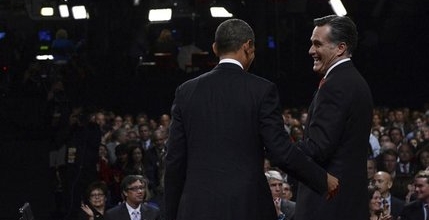 LOS ANGELES (Reuters) – More than 67 million Americans tuned in to Wednesday’s first presidential debate between President Barack Obama and Mitt Romney, ranking the match-up among the top 10 of the past 30 years.

Final Nielsen data on Thursday showed that 67.2 million people across 11 TV networks watched Obama and Romney go head to head on the economy – a 28 percent increase on the 52.4 million who saw the first 2008 debate between Obama and Republican John McCain. Read more