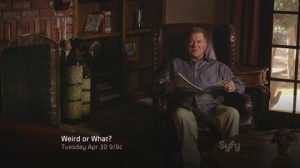 What are the TV critics pitching for you to watch tonight? Click the link and find out.

The New York Times recommends a show about strange stuff, ‘Weird or What’ on Syfy, which debuts tonight at 9 and 10 with William Shatner. Read more

Ed Stockly of the LA Times picks ‘Live from Lincoln Center’ on Friday night, with music from the Broadway show, Carousel, performed by the New York Philharmonic.

As we do every day, we look at what the TV critics at USA Today, the LA TImes and The New York Times are picking to watch on TV. USA Today and the NY Times pick ABC’s ‘Suburgatory’ as a show to watch tonight, while the LA Times selects a PBS program, ‘Guts with Michael Mosley.’

What are the critics picking for you to watch tonight? We have it right here every day, with selected articles from USA Today, Los Angeles Times and The New York Times.

Today, we bring you a look at critics picks for the upcoming weekend programming and sports, a look behind-the-scenes at CBS Final Four coverage, via USA Today, a new Twitter account for Al Jazeera, digital ad news, lots of sports and a look at the Latin Market. Read more