Topsy Twitter Analytics for #election2012 and #ivoted at 7 p.m. 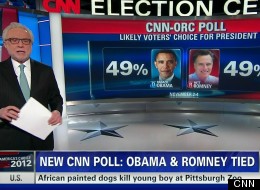 At 11 a.m. Tuesday, representatives from five TV networks and the Associated Press will head into the “quarantine room,” an undisclosed location with no cell phone or Internet access.

All told, the campaigns and their allies are projected to spend $1.3 billion on TV ads, according to Kantar Media/CMAG, a firm that tracks political advertising.