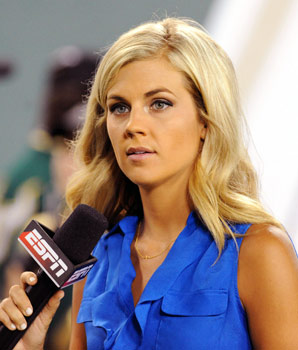 The job is an odd mix of sports knowledge and sex appeal, journalism and entertainment. When done with a editorial bent by the likes of Jeannine Edwards, Andrea Kremer or Michelle Tafoya, sideline reporting can be an invaluable service to sports television viewers. A pointed question following a tense game often produces memorable television; same with intrepid fact-finding following a key injury. Of course, the gig remains an endless source of fascination (Fox Sports reporter Pam Oliver was trending on Twitter yesterday afternoon with a spate of tweets that focused on her appearance) and chatter disproportionate to actual air time, especially among the sports blogosphere who commoditize the images of the mostly-women in the position for easy page views.